Travellers are advised to read the FCO travel advice at gov.uk/foreign-travel-advice for the country they are travelling to. All recommendations have been reviewed and approved as of March 2020 and will be checked and updated annually. If you think there is any incorrect or out of date information in this guide please e-mail us at [email protected]

Berlin is booming. To add to its deep-rooted creative culture, the German capital is now one of the world’s leading start-up hubs, with a thriving tech industry that’s attracted thousands of new global businesses to the city. Recent immigration has swelled Berlin’s population further, with a large Syrian demographic joining more well established Turkish and Vietnamese communities.

The resulting impact of this new international culture on Berlin’s food scene has been dramatic; with scores of new restaurants offering a taste of new cultures and cuisines, there’s never been a better time to eat out.

Combining two of Berlin’s biggest trends, fine dining and Thai food, Kin Dee might just be the city’s best restaurant. Chef Dalad Khambu takes flavours from her native Bangkok and locally sourced ingredients to create striking modern Thai dishes that pack a punch. Highlights from the menu include clams with house-made chilli paste and a sweet green curry with beef and aubergine. Tasting menu 47 per person.

This is Billy Wagner’s love letter to Berlin, with dishes made exclusively with produce from the capital and its surrounding areas – you’ll find no tuna, lemon, or even pepper on the menu here. Seated around a kitchen counter, the 10-course tasting menu is served directly by the chefs, and features crisp potato latkes with apple sauce, and venison tartare with red cabbage. Tasting menu 102.

As the first zero-waste vegan restaurant, Frea has taken the city by storm with its menu of simple dishes made with local ingredients, including fresh pasta, pickles and sourdough, as well as kombucha and hazelnut milk made in-house. Any leftovers are converted into a soil substitute. Mains from 9.

With one of the largest Vietnamese communities outside of Vietnam, Berlin is not short of restaurants peddling pho and banh mi. Standing out from the crowd is Madame Ngo, a smart destination in West Berlin from one of the city’s most successful restaurateurs Duc Ngo, also behind such hits as Cocolo Ramen and Kuchi. A big varied menu includes some French influences, but it’s the steaming bowls of pho made with the best German beef that are the real draw. Pho from 11. 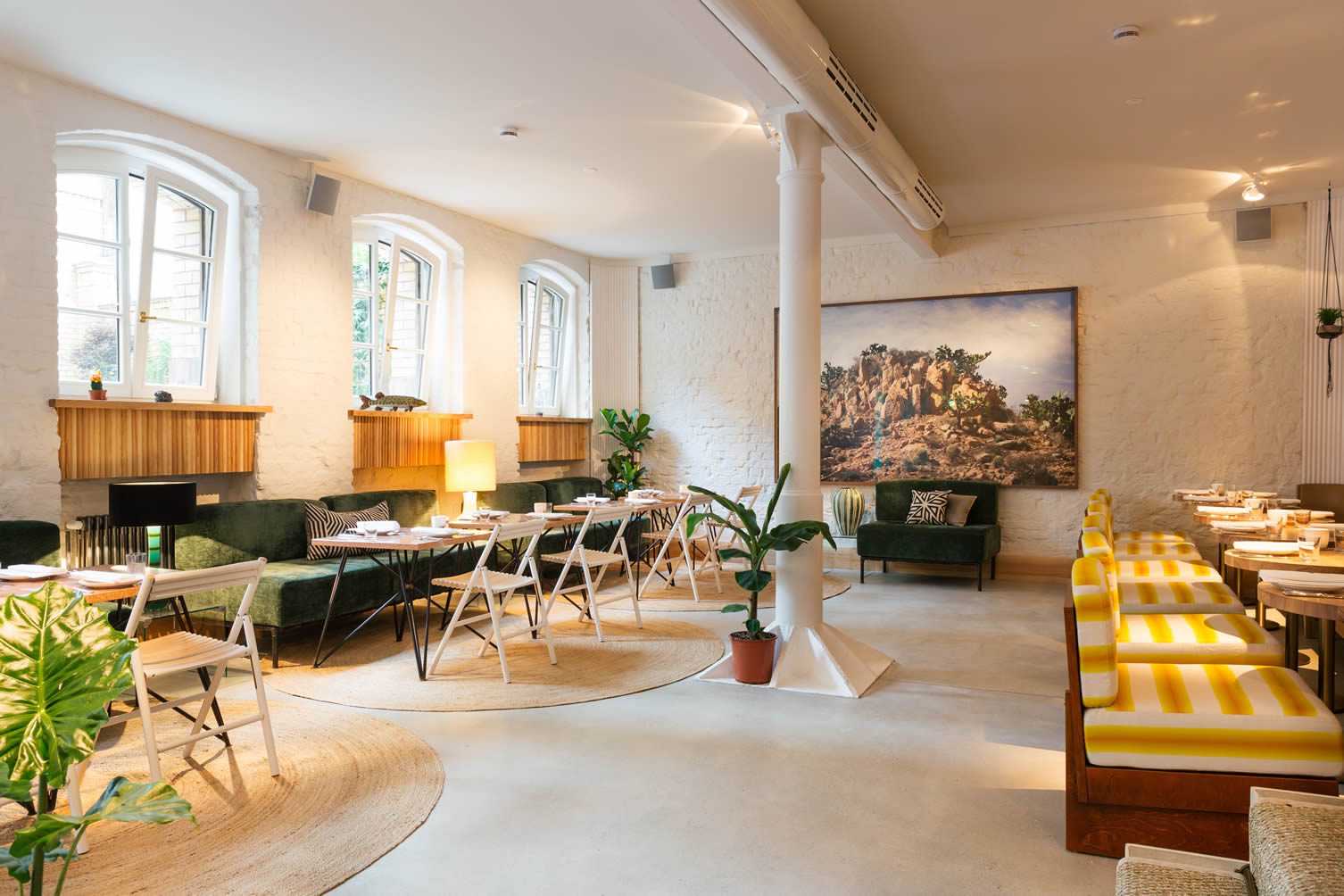 Set in a converted warehouse, this space is full of modern artworks and colourful tropical details. Head Chef Sophia Rudolph’s menu is as eclectic as the design, with a vegan version of tacos al pastor made with mushrooms; a seabass ceviche with cucumber and avocado; and curried cauliflower with cured egg yolk and soured cream. Mains from 16.

It’s Markthalle Neun in the arty Kreuzberg district that has provided the launchpad for many of the new openings in Berlin. Every Thursday evening, it hosts a street-food market, everything from Thai tapioca dumplings to British pies, and – as everywhere – the progression from market stall to bricks-and-mortar is a tried and tested one. Try home-smoked fish from Glut & Späne; glorious focaccia, farinata (chickpea-flour pancakes) and Italian breads from Il Pane di Sironi; and pork belly, brisket from> Big Stuff Smoked BBQ.

Butcher Kumpel & Keule not only sells the handsome looking cuts of meat, but it will grill it to order for eating at one of the market’s many tables. Perfect with beer from maverick craft brewer Heidenpeters who are creating massive waves with their defiantly non-traditional approach to brewing. The market’s most recent alumni are to be found not far away: two young Dutch guys who made waves with a series of pop-ups. Now they have their own Lode & Stijn; owners/chefs are Lode van Zuylen and sommelier Stijn Remi.

Just a few yards from Checkpoint Charlie, find the remarkable Nobelhart & Schmutzig. No photographs are allowed, so both the striking interior and the edgy, hyper-local food – they even avoid lemons, black pepper and chocolate – come with a frisson of surprise. There are blades of chicory, grown in the dark so it tastes almost like pear, laden with salty, delicate coral-coloured roe; ‘old dairy cow’ from Schorfheide served raw, with wafers of raw, pickled potato; an incredible potato soup poured into a bowl lined with black pudding, shot through with some sinus-clearing mustard.

Cordobar, near seedy Oranienstrasse, is equally dedicated to off-piste wines, but is more up for a party; Fat udon noodles ‘tantan’ – or dandan, featuring minced, spiced raw beef and coleslaw – shouldn’t work, but emphatically does. Pizza comes with black pudding, feta and wasabi. It may sound ludicrous, but it’s done with such a sure hand that it’s never less than delicious.

Find Kanaan, a snackbar in Prenzlauer Berg, where Jalil Dabit and Oz Ben David create hymns to hummus and shakshuka.  As for their malawach, served ‘sabich’ style with grilled aubergine and egg – anyone who accuses vegetarians of being hair-shirted need only take one giant bite of this buttery, flaky bread, the stuffing spilling deliciously messily: sheerest luxury.

A different kind of vegetable-based luxury is in store at the Berlin outpost of swanky members’ club Soho House in a landmark Bauhaus building – with a shady history – on the corner of Torstraße. At Store Kitchen Tommy Tannock and Johnnie Collins are stirring up something of a buzz. Not only do they offer a regularly changing, and intriguing menu of mostly vegetarian food, but also place lots of emphasis on smoking, pickling and fermenting.

Art and beauty also suffuse delicious, bijou Tulus Lotrek. In a beautiful old townhouse apartment in Kreuzkölln, partners Ilona Scholl and Maximilian Strohe have created something quite enchanting. The cooking is ambitious, frequently out-there – pairing lobster with pear, mushroom and horseradish is a risk that quite comprehensively pays off. Dishes appear restrained, but Max’s mantra of ‘pure indulgence’ shines through every mouthful and he plays fast and loose with the storecupboard of Asia.

At Einsunternull, the mantra is locality and a parade of sublime wines. Dishes are plated like Japanese artworks, even humble ingredients such as button mushrooms are turned into things of paper-thin sophistication with toasted hazelnut purée. A chunk of intense beef spare rib, just rosy, comes with a pool of sticky, black, slow-cooked celery root. This is no place for a Bunterish blowout, but for those drawn to the intrinsic beauty of food, it’s unmissable.

Discover the city’s oldest restaurant, wood-panelled Zur Letzen Insanz, and its giant ham knuckles. Or Rogacki, a vast, eccentric food hall in a dusty corner of Charlottenburg, a palace of deli food forever frozen in time.

Dishes You Should Try In Uruguay